John Deere lawn mowers & tractors are made by the John Deere company mainly in Waterloo, IA, and Greenville, TN. Lower-end products with the John Deere name on them are made by MTD. The company is famous for offering various types of high-quality machinery and heavy-duty equipment such as the Z345M sold at specialty stores and other riding models like the D100 and E130 and those can be purchased at big-box stores such as Lowe’s, as well as outdoor stores and online.

The company has been in operation since 1837 when John Deere invented and started manufacturing farm equipment. He is the founder of the company that is today known as the International Powerhouse.

John Deere was born on February 7, 1804, in Rutland, Vermont. He was the third-born son of William Rinold and Sarah Yates Deere. The family relocated to Middlebury in 1805, where William Rinold Deere started some dealerships.

In 1808, William embarked on a ship to England to pursue an inheritance that would improve his life and that of the family. Unfortunately, he was never seen or heard again from the time he embarked on the journey.

John Deere was brought up by his mother alone, with a low income. When he was 17 years old, John learned the blacksmithing trade and started an apprenticeship, which he did in Vermont.

John Deere traveled to Grand Detour in Illinois in 1836 to start his apprenticeship from scratch. Due to his skills, creativity, and diligence, John’s demand as a reliable blacksmith went up immediately. The new and groundbreaking farmers struggled to use the iron plows to rebuild the heavy and sticky grassland.

Using his skills and experience, John Deere believed it was possible to have a well-shaped and polished plow that can undercut while cutting the furrows. He came up with the first plow in 1837 using a broken blade of a saw.

By 1841, John Deere had developed 100 plows per year. Due to the growing demand for the plows, John Deere got a partner, Leonard Andrus, to create more plows.

He broke the partnership in 1848 and moved to Moline in Illinois. There was more demand for other tools in Moline, including in transportation, water, and coal.

John Deere transferred the leadership of his company to Charles Deere, his son, who was serving as the vice president. The father continued to act as the company’s president though he wasn’t involved in producing the tools. He was primarily engaged in civil activities.

The John Deere Company seeks to come up with solutions that sustain the livelihoods of its customers. It also aims to influence the lives of communities around the world for future generations.

The company is all about innovation and technology. It strives to come up with new ways of thinking and also create new ways of doing things. Innovation is not meant to disrupt the status quo. Instead, it helps to develop customer-centered solutions that will help make their jobs less challenging and profitable.

Additionally, the company conducts business that is critical to life. With over 180 years of experience and loads of precision data, the company knows its customers and understands their businesses more than anyone else.

They use technology that makes it possible for the customers to see satisfactory results on the job site and in the field.

The company always insists that it is there to help life leap forward. Thus, they offer various services that help make your life while using their equipment seamless. You have effortless access to services, spare parts, and performance upgrades throughout the equipment’s life cycle.

John Deere lawn mowers are designed to tackle any job in your yard. They come with various attachments ideal for multiple tasks such as hauling, mulching, bag, plow, etc. This makes taking care of your lawns an all-year-round activity, irrespective of the season.

Note, each lawnmower has its slopes limit and features. Ensure you don’t push the machine beyond its limits to ensure durability.

Lawn care advocate for over 10 years helping brands such as Toro, Craftsman, Tru Green, and more by helping them with their marketing. I've been in the lawn care industry all my life.

FacebookTwitterPinterest Looking for the best riding lawn mower for zoysia grass? Zoysia grass or lawn grass has a productive role to make any lawn or garden or meadows glower beautiful and Greeny. It not only beautifies the garden but also adds allurement to nature. To maintain this attractiveness, there is a dire need to mow…

FacebookTwitterPinterest Looking for Remington Lawn Mower Reviews? Remington was started by a man named Arthur Mall in 1921, initially, it was a small power tool company that manufactured gas-powered and electric-powered saws and drills. Over the years the company grew and its products became more popular among users, and the company started expanding and launching…

FacebookTwitterPinterest Looking for the John Deere E130 mower review? The John Deere e130 is one of the best riding lawn mowers I have looked at this year and features a powerful engine. It does not only have a charming look but it also works like a pro in yards. That’s why many people are searching…

FacebookTwitterPinterest St. Augustine grass renovates the garden to make it an aesthetically pleasing sight. With grass so distinctive, an investment in the right tools is a must. To care for St. Augustine grass, you need certain kinds of mower, fertilizer, and other lawn tools. St. Augustine is a warm-season grass native to the tropical and…

FacebookTwitterPinterest It has always been debatable whether to mow a lawn when wet or not. However, after it rains for quite some time lawns are usually looking unattractive due to the significant time that they have not been lawn. It is not a crime to mow when it has stopped raining and the grass is…

lawncareguides.com is a participant in the Amazon Services LLC Associates Program, an affiliate advertising program designed to provide a means for sites to earn advertising fees by advertising and linking to Amazon.com. Amazon and the Amazon logo are trademarks of Amazon.com, Inc or its affiliates. 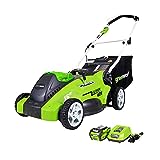