Finding weeds with thorns on your lawn can be a bit disheartening, because not only do they affect the stunning appeal, but can also be harmful to you and other members of your home.

If you have weeds in your yard that have thorns and are not sure what they are or how to treat them, then this weed directory is for you. I have listed the most common weeds that grow in all regions of North America.

Spotting weeds with thorns is also a tricky task, but here’s how to identify and get rid of them easily.

Cocklebur (Xanthium Strumarium) is a very common thorny weed that is considered a nuisance to livestock producers.

This annual weed is claimed to have originated from North America and is found throughout the United States.

Cocklebur reproduces solely by seed and reaches heights between 30-150 cms. It is easy to identify spots and short hairs.

This weed is greenish in color, and bears elliptic to egg-shaped fruit, that grows between 0.5-1.5 inches long, and has hooked prickles.

It features stout, forked spines at the base of each leaf, which can hook onto your clothing, and become tightly attached.

Cocklebur (Xanthium strumarium) can be found in small streams, roadsides, and riverbanks, and can be removed by hand for populations prior to flowering.

How To Treat (Kill) Cocklebur

My go-to product to prevent, control, and kill Cocklebur is: Roundup Pro 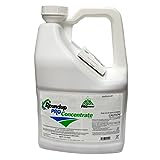 Commonly known as teaweed, Prickly Sida is a summer annual that is one of the most common and troublesome weeds in cotton, peanuts, and soybeans in most of the southern states.

Even though teaweed is primarily a weed of agronomic crops, it can also be found in landscapes, horticultural crops, hayfields, pastures, and gardens.

It features yellow flowers and very small spines located at the base of each leaf and branch. The cotyledons of teaweed are typically heart-shaped with a small indentation at the apexes.

The leaves of Prickly Sida measure between 3/4 to 2 inches long, and are neatly arranged along the stem. The stems of teaweed are erect, branched, and grow between 8 – 20 inches in height.

Prickly Sida can be easily identified in several ways, starting with its seedlings, which feature two heart-shaped cotyledons and feature small thorns located at the base of each leaf.

You can prevent Prickly Sida from becoming a major problem by hoeing, hand pulling, and mulching when the weather gets warm.

If Prickly Sida has emerged prior to planting, Burndown applications of glyphosate, glufosinate, or paraquat are generally effective at getting rid of this weed.

How To Treat Prickly Sida

To kill and control Prickly Sida I use a product called: Triclopyr 4

There are hundreds of different species of brambles, and each is easily recognizable with its woody, thorny stems, and vigorous root systems.

Woody brambles have long stems that grow flowers and fruit in their second year. These rough, tangled, prickly shrubs can be difficult to eradicate once they become established.

They scramble over the ground and low plants and spread via its rhizomes. Woody brambles feature variously shaped (usually cut-edged flat leaves, and white to pink five-petalled flowers followed by clusters of blackberries.

Wood brambles can cause low to moderate damage in open habitats and can inhibit the establishment of native plant seedlings.

To get rid of wood brambles, you can dig out small patches of the weed all year round, and burn the roots or bury them deeply.

The best time to dig wood bramble roots is when the soil is moist and forgiving. You can mow over wood bramble to keep the stems short, but doing so will encourage the growth of suckers from the lateral roots.

On a brighter note, the leaves of wood brambles can be used to treat stomach problems and diarrhea.

Declared a noxious weed by the state of Vermont in 1795, Cirsium is commonly known as plum thistles and belongs to the genus of perennial and biennial flowering plants in the Asteraceae.

This thorny weed is native to Eurasia and northern Africa, with roughly 60 species from North America.

Most species of Cirsium are considered weeds, but there are a few species that are cultivated in wildflower plantings and gardens for their aesthetic value.

The flower heads of thistles can be of different colors including rose, purple, pink, yellow, or white.

Thistles can spread quickly by seed, and also by rhizomes underground. To get rid of thistle seedlings and small plants, you can cover with mulch to eliminate seed germination, and snip small thistles at the soil level.

You will have to dig the rhizomes out with a sharp shovel or similar tool. You can hand weed them out as well, but this isn’t such a good idea for an entire lawn.

If you have large infestations of thistles, you may have to spray a week killer of your choice.

It is likely to have originated from Central America and has since made its way to several world regions.

Thorn Apple is an aggressive invasive weed that thrives in temperate climates across the world. It’s an erect annual that grows leaves about 8 to 20 cm (3–8 in) long.

The leaves of thorn apple are densely hairy, especially on the underside. Thorn apple grows trumpet-shaped fragrant flowers that can be white, yellow, pink, or purple, which produce a thorny capsule fruit with numerous seeds.

Getting rid of thorn apple can be done with a broad-spectrum herbicide, spraying a herbicide will kill any thorn apple seeds it has distributed but make sure you spray the herbicide carefully only on the thorn apple weed, and not your desirable plants.

If you have a heavy infestation, lay black plastic over the area after digging up the existing thorn apple plants from the ground.

Dispose of the dead and dug-up thorn apple plants in an area such as a garbage can or trash dumpster, or where regrowth will be prevented.

Mimosa diplotricha is an invasive weed that’s native to the Neotropics. Commonly known as Nila grass, the giant false sensitive plant or giant sensitive plant, Mimosa Diplotricha was first described in 1869 by American botanist Charles Wright, and grows either as an erect shrub or a scrambling climber.

The stems of Mimosa Diplotricha are very long and feature a very sharp row of recurved thorns.

Mimosa Diplotricha typically flowers and seeds from April through the end of June, and spread through seeds, which are transported by running water, stock, and contaminated earth and /or vehicles.

Start by loading your sprayer with the herbicide, spray Mimosa Diplotricha in a methodical pattern, wait 90 days, and repeat the process if necessary.

Scientifically named Crataegus Monogyna Jacq, Hawthorn is a weed that crops up in humid and sub-humid temperate regions. It grows well in most soils and is a weed of lowland grasslands and grassy woodlands.

Originating from Europe, Hawthorn features hairless much-branched stems that are reddish-brown when young but turn grey when they mature, and at this time grow stiff spines that measure up to 12mm long.

This deciduous shrub or small tree’s hairless triangular leaves are a treat for slugs and certain other insects.

How To Get Rid of Japanese Knotweed

Lawn care advocate for over 10 years helping brands such as Toro, Craftsman, Tru Green, and more by helping them with their marketing. I've been in the lawn care industry all my life.

FacebookTwitterPinterest It’s a nightmare to have Nutsedge in your yard. Once it takes hold, you must be ready to battle with it over the long haul. Nutsedge is not just a weed, it’s a super-weed. If you’re a gardener, you know that nutsedge can be a real pain. This weed can quickly take over your…

FacebookTwitterPinterest A beautiful lawn is a showcase of your art. All year we wait for lush green grass to walk not for coarse or fuzzy weeds. Weeds’ growth is more and rapid as compared to grasses. It feels like sick crabgrass, dandelions, and other weeds growing in your lawn. Every house owner hates this repulsive…

FacebookTwitterPinterest It’s not necessary to save everything that grows in your garden or yard. Not to mention chickweed, which is one of the most invasive weeds on the planet. To get rid of the troublesome chickweed, your initial instinct is to apply weed killers or pesticides. However, this isn’t always possible due to a variety…

FacebookTwitterPinterest Disclaimer: To prevent any issues from the advice here. Only use this for entertainment. Never use any type of gas outside of a contained system. Advice on this page is for reference only. A healthy, fully grown, weed-free, and lush green lawn is the pride of every gardener and it urges them to look…

FacebookTwitterPinterest Weed trees? Have you ever heard of them? Maybe or maybe not. But don’t worry, now you have reached the right place.  Weed trees are a big deal. Potentially. But identifying and controlling them is far more difficult without proper knowledge. Weed trees are actually the tree species of youngsters that are aggressive invaders…